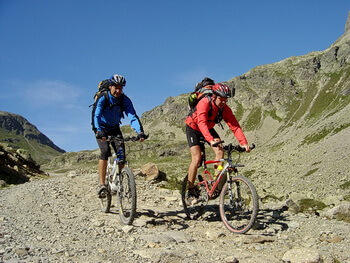 We have breakfast in the youth hostel. There's a Swiss school group staying so it's worth Frau Tinner, the matron's while to make the meal. Fortified, we start our attack on the long gravel climb into the Val Mora. The climb starts straight away and I miss the warm up kilometres. At the Alp Pra de Vau there's the first flat bit and the first chance to relax the legs. Things go better after that and I grind on up to Alp Praveder. After a short break light work is made of the last bit of the climb to Döss Radond. It is sunny, but still a little on the fresh side. We have the mountains completely to ourselves, that is if you don't take the thousands of marmots into account, who draw attention to themselves with their characteristic whistle. Matze can imitate them brilliantly and it's like they're entertaining one another. We pull on out wind jackets and enjoy the downhill through the Val Mora. The high valley is overwhelming in this weather and we have to keep stopping to gawp at the surrounding three thousanders. The isolated high valley is just like a set for a western, incredible that it's all real and not just a painted backdrop. The gravel track turns into a trail first through meadows and then snaking through dwarf pines. From a bridge over a stream the valley gets narrower with the path running on the left hand side of the stream over scree slopes which make you dismount every now and then. It's wildly romantic, at any minute Winnetou could come riding around the corner.

At the Passo Val Mora we leave Switzerland behind us, another border and another language. Italy. The path runs through the last of the scree slopes which have been caused by mountain erosion. At the Passo Fraele a reservoir comes into view where they're doing some building on the middle dam wall. I guess the huge reservoir has to be kept in condition even if the dust thrown up by the trucks is somewhat irritating. We ride around the right side of the reservoir which is the more interesting from a landscape point of view and go past where the gravel track up to the Passo Alpisella comes out. David and I came along here from Livigno in July. Then it was late afternoon and we were on the look our for somewhere to stay, which we finally found in Arnoga. 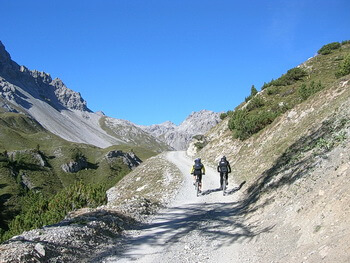 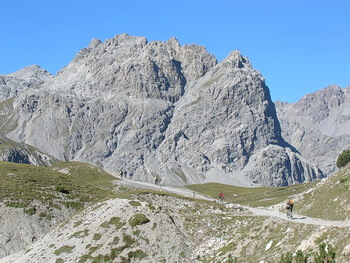 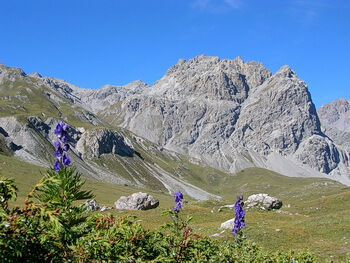 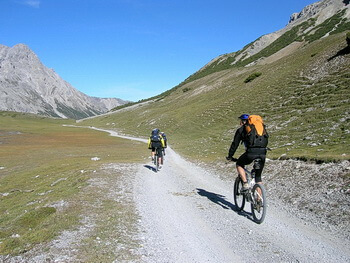 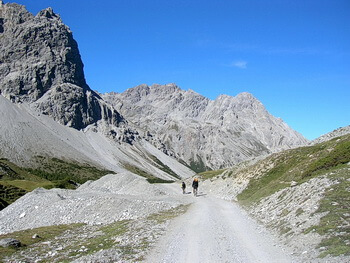 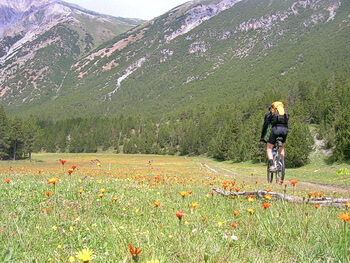 At the Passo Val Mora we leave Switzerland behind us, another border and another language. Italy. The path runs through the last of the scree slopes which have been caused by mountain erosion. At the Passo Fraele a reservoir comes into view where they're doing some building on the middle dam wall. I guess the huge reservoir has to be kept in condition even if the dust thrown up by the trucks is somewhat irritating. We ride around the right side of the reservoir which is the more interesting from a landscape point of view and go past where the gravel track up to the Passo Alpisella comes out. David and I came along here from Livigno in July. Then it was late afternoon and we were on the look our for somewhere to stay, which we finally found in Arnoga.

Today we've still got plenty of time. At the Rifugio Giacomo the deck chairs are laid out invitingly in the sun. Coffee stop. As if no time has gone by in the past year there's a little kitten again who is doing circles around David. After the break we set off , still on the gravel track along the edge of the lake. Above the dam we stop again and wonder at the mountain scenery. You can clearly make out the summer ski area on the Stilfser Joch with it's dark lift pylons against the white of the snow. we can't however tell if the lifts are running. You can also see the zig zag trail that makes its way up the rock wall of the Valle Forcola. With weather like this it's just a fantastic stretch. We would also have been able to do this bit starting in St Maria, just we'd have had to leave out the Val Mora and take the road (which doesn't have much traffic on it) up to the Umbrail Pass to get on to the high path to Bocchetta di Forcola. It's always a tricky decision, but up to now I've always gone for the Val Mora. Somehow this way seems more logical. I feel that the route over the old World War One military roads fits better to a transalp coming over the Stilfser Joch. 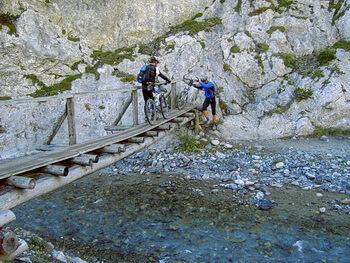 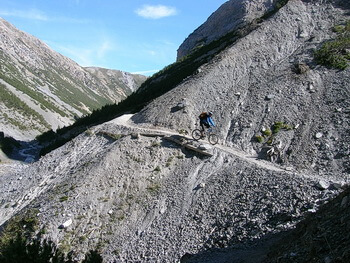 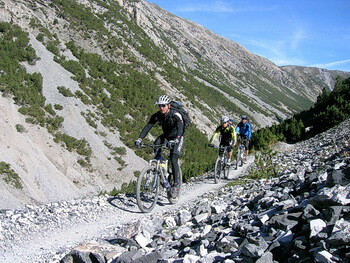 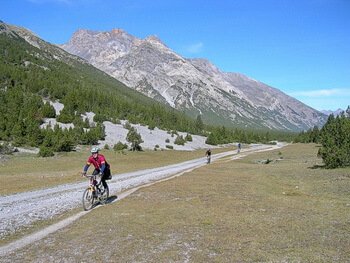 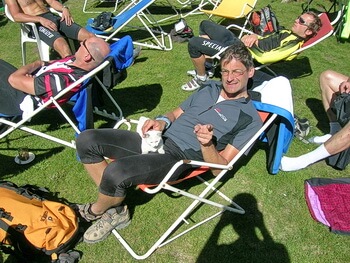 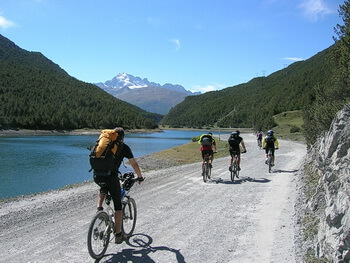 Well, I don't have to sit and puzzle for long about the chosen route of the day. After the Torri di Fraele in the third hairpin we take the right hand turn towards Arnoga, along the old "Decouville" military road. We need a lot of time for this today, not because we're lazy but because the views are so amazing and we have to keep stopping to soak it all in. In the past few days knowing what's coming with the landscape highlights I've kept saying "tomorrow it's going to be just a tad sharper!" It really is so. The impressions of one day just keep getting beaten by the impressions of the next and so on and so on in the sequence of this dream transalp.

We stop for a cappuccino in Arnoga. It was an unnecessary mistake, with the break we lost the relaxed feeling in the leg muscles which we'd just got through the longer flat passage. A feeling one really could do with on the Passo Verva. Matze and Christian manage to ride the whole of the tricky gravel trail. The rest of us push our bikes every now and then. You can take in the majestic mountain scenery so much better that way... The downhill on the rough gravel trail to Eita we make good pace on stopping every now and then, it would be a sin just to let this remote landscape to rush past us.

In the little mountain village Eita we see signs of life again. Ancient landscapes are still worked in ancient ways mostly by the elderly inhabitants of the valley. A farmer and his wife are busy with a type of chaffing machine chopping up dung so it can be better spread on the fields. In the front garden of an old farm house an old man is lying in the shadow covered with a thick felt blanket with his wife next to him. I greet them with a "Buon giorno!" they nod and wish us a good trip "Buon viaggio, ragazzi!" It really is idyllic, but I can only imagine how hard life is up here and how hard it must be for people who've lived like this for centuries to find a place in the world today. I think though to myself that despite all our newfangled mobile phones, full suspension bikes and GPS, if it came to the crunch the people who live up here would without a doubt manage better when they had to save themselves as us 21st century townies. Enough of the philosophy. In Grosio the Hotel Sassella is waiting for us. The speedy downhill over 1000 metres of descent on little lanes blow all questioning thoughts out of the head and the Mediterranean air of the Valtellina does the rest to get rid of any little doubts about the sense of lack of it of a transalp. The valley isn't touched by mass tourism and has kept its quiet lifestyle. Cycling through the villages it occurs to us hectic Germans that the people still stand chatting on the streets. With joy I greet Marcella and Jim Pini, the boss of the family run hotel. I feel quite at home here. I first stayed here on a transalp in 2001. The classic Italian evening menu and the in house service is as usual from the very best. I know I haven't stayed here for the last time. 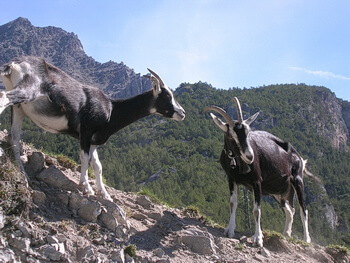 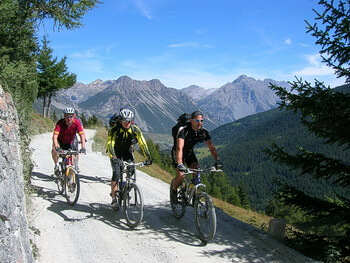 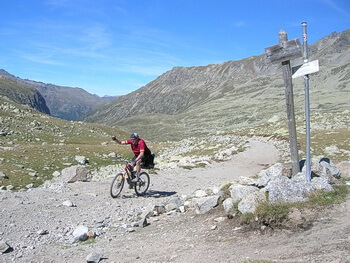 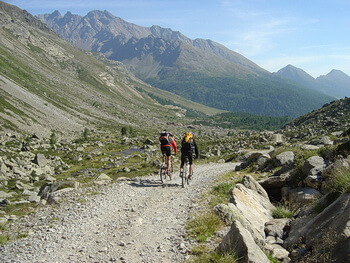 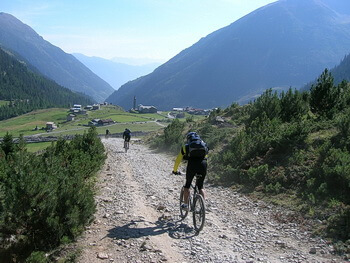 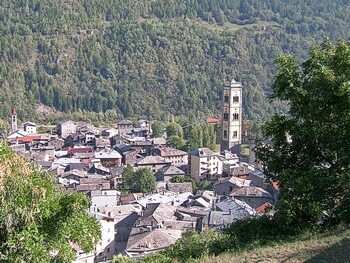 · From the Torri di Fraele take the gravel hairpins down to Bormio and the old road down to Grosio
· Or you can go straight on to "La Baita" in to the Val Rezzalo (shortens the transalp by a day.)
· if you are strong enough to ride on a little bit ont thr route of day 5 - so try to reach Sondrio. In Bolladore there is a nice little hotel on the route: HOTEL DELLE ALPI -from Grosio to Bolladore only ca 5. 5 km and 150 moa 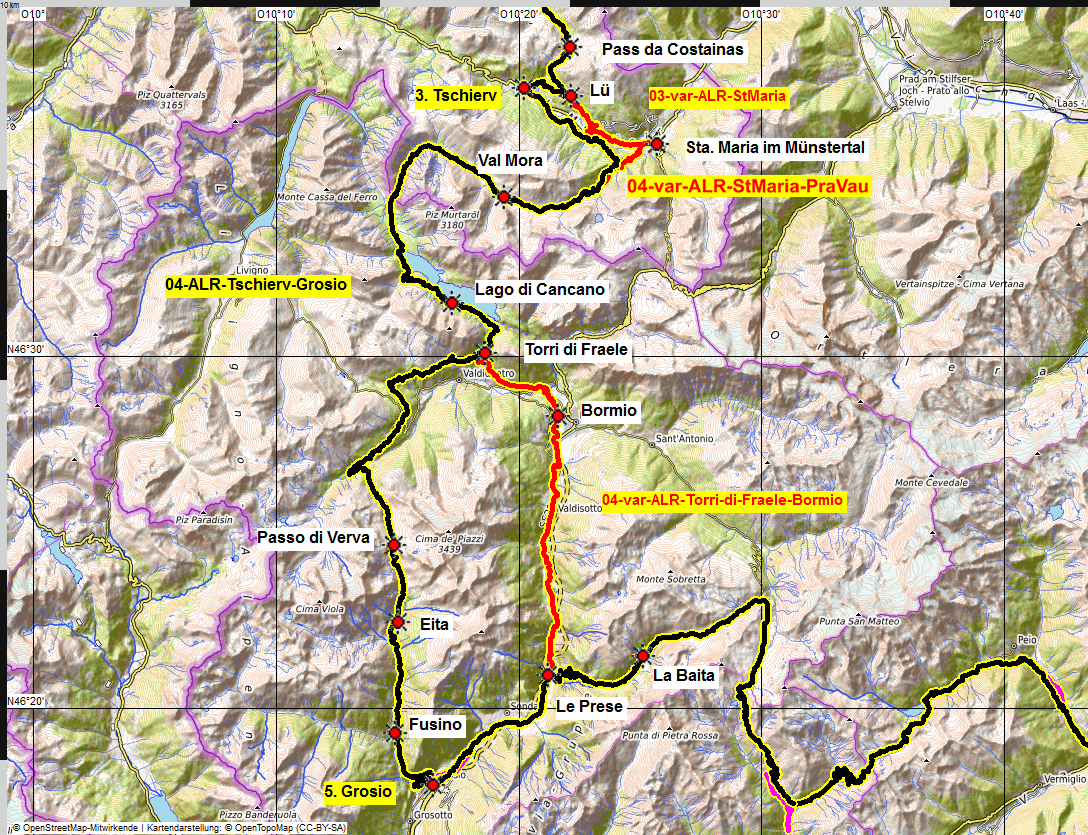 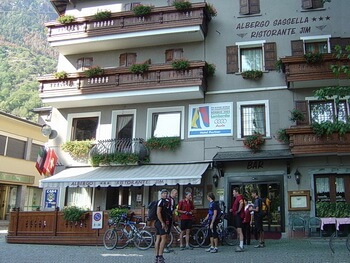