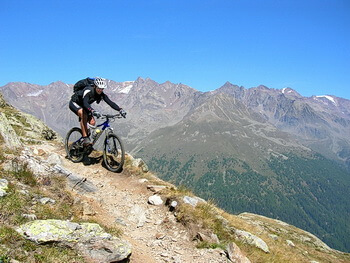 Another misty morning in the mountains, but it is obviously only fog. I don't need any time to decide that today the road route to the Tonale Pass won't be our first choice. We have about 1200 metres of ascent waiting for us up to the Montozzo saddle, which can mostly be done on an old military road. You have to go back along the way that we rolled down yesterday from the Gavia Pass for a bit, but soon we turn right to Pezzo, pass through the sleepy mountain village and reach Case di Viso. This is where the road stops and the gravel track begins. You can see the hairpins working their way up the mountain, firstly moderately steep then a few steeper passages which may force you temporarily out of the saddle. The sun gets buried behind the veil of mist which is fine by us. I did this once in 2000 in hammering sun and it wasn't a pleasurable experience.
By the time we get to the Rifugio Bozzi al Montozzo the field has spread far apart. Matze powers on, probably still on the big cog. The Rifugio is on a little saddle with a fantastic view over the mountains, and soon also into the valley as the fog clears just at the moment we're all together again. We make a longer break and visit the remains of the old war instillations. What they possibly were trying to defend up here heaven only knows. The defence lines go right over to the Passo Tonale, the old way is still there and would be worth an exploration. But not today, with these perfect conditions there can be only one route: over the Forcellina di Montozzo.

My thoughts return to September 2000. I was up there then too. At the moment we reached the saddle a thunder storm broke out with hail and all. The rain turned the track in to a torrent. Completely dirty and soaked we had to seek refuge in an hotel in Pejo. I don't think we need fear a repeat performance today. The sun has chased the last of the mist away and laughing, we get our bikes up the last few metres. We can see the remains of war time trenches. A small commemorative plaque remembers the victims of this senseless mountain war. We stop for a moment and let the grandiose panorama of the Cevedale group work its magic on us. The mountains here are way over 3500 metres. The air is unbelievably clear, the sky steel blue. The trail is ridable from the highest point. We cross a few little streams which don't have much water in them. After a little alm hut it gets steeper. From a rock plateau the view suddenly opens onto the turquoise blue Lago di Pian Palu, which lies about 500 below us in the kettle of the Valle del Monte. 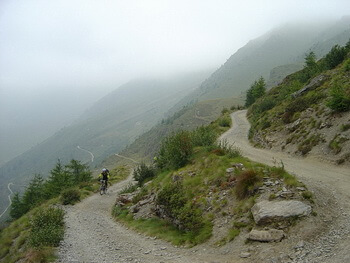 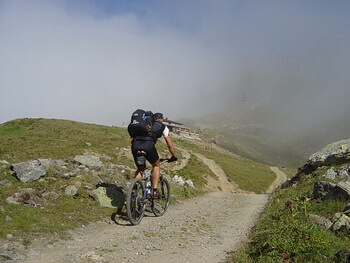 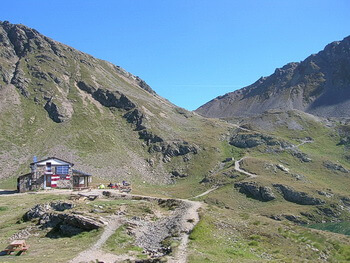 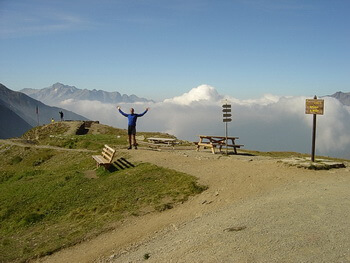 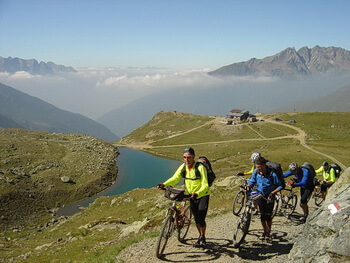 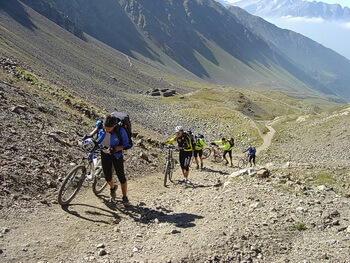 The single trail to it is just a pleasure for all technicians. The 111 path forks at around 2150 meters. Left or right? It's the same, both lead to the reservoir and both have their own appeal. This time we take the left hand fork, cross another few streams and enjoy the challenge of the single trails. Matze is out in front and waits at a sunny spot for all to catch up. It takes a while. Rainer comes along, he has a little accident behind him, the helmet came off worst. We examine dent in it. Without the helmet it could have been nasty. Olaf and David are still missing. Matze and I in the end ride back a bit, but no ground to worry, Olaf used a stream crossing to wash a graze on his knee. As we reach the dam wall all the tricky bits are behind us. A fisher is pulling a big trout out of the water: "Buon appetito!" I call over to him and watch his efforts for a bit before moving on. There's a good gravel track down to Fontanino di Pejo. At the well the locals fill up water in big canisters, it's reputed to have healing properties. We put our trust in the stuff we already have and cycle on. The track turns to asphalt.

In Pejo we briefly stop. I suggest that we get the following road passage behind us quickly. There aren't many cars on the road. There's a strong headwind, like there often is in the mountain valleys. Half way to Fucine there's a bike road going off to the right which quickly looses altitude. It leads directly to the Val di Sole bike road. We stay on the bike road to Dimaro. Olaf and I take turns making a wind shadow and are there in no time at all. It's early afternoon and the supermarket is still closed. Time for a rest. The sun is hot. We sit in the shadow and eat a little. We still have a 800 metre climb before us. At the edge of the town we leave the road in the first hairpin. The mountain bike track goes straight ahead to Madonna di Campiglio. Along the flanks of the Brenta from time to time we get great views of the rock towers of the mountain group, as much as you can take them in between peddling, sweating and panting for breath. It is attributed to English mountain friends that alpine tourism started here in the Brenta. Through the many fixed rope climbing paths the massif belongs to one of the most comprehensive hiking areas. In the meantime the mountain bike tourism has established itself here too.
The path markings are not to be missed: always follow the signs MTB-Madonna. The track goes along the edge of a canyon which we cross on a covered wooden bridge. Time for a little breather. The track gets flatter and stays in the shadow of the trees and therefore the temperature stays comfortable. Later there are a few steeper bits, until you get near to the road. Nearly there. At the Malga Mondifra we fill our water bottles for the last time. At a little ski lift we've reached the highest point and just have to go down hill.My friend Matteo's Hotel Arnica is right in the middle of Madonna di Campiglio. I have often stayed here. Matteo is in the middle of planning his first transalp, and I can give him lots of tips. I recommend that he takes the route we've just done. One of the others he's going to do it with arrives and I show them the route from my scanned maps. I leave the sheets there and wish them luck and good weather. It worked, after a successful tour Matteo sends me a photo from the Pass da Costainas. We end the day in a Pizzeria, take a night cap in the hotel bar and fall early into bed. 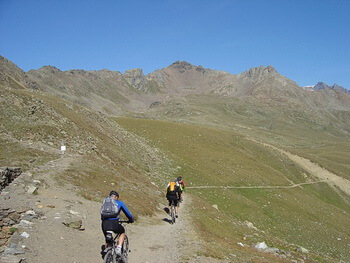 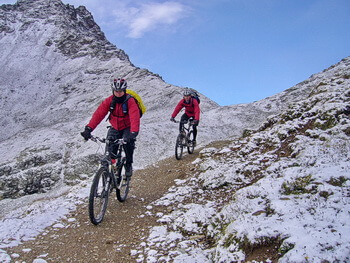 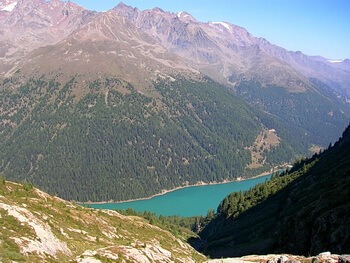 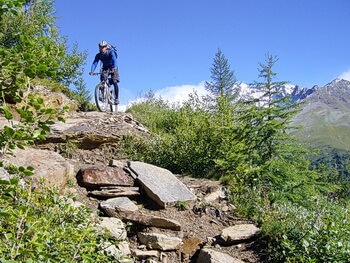 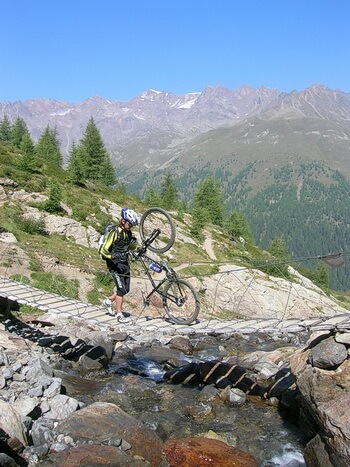 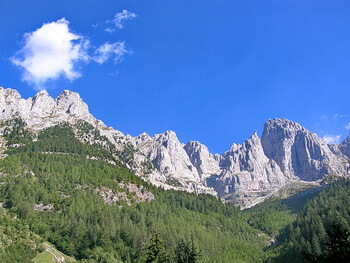 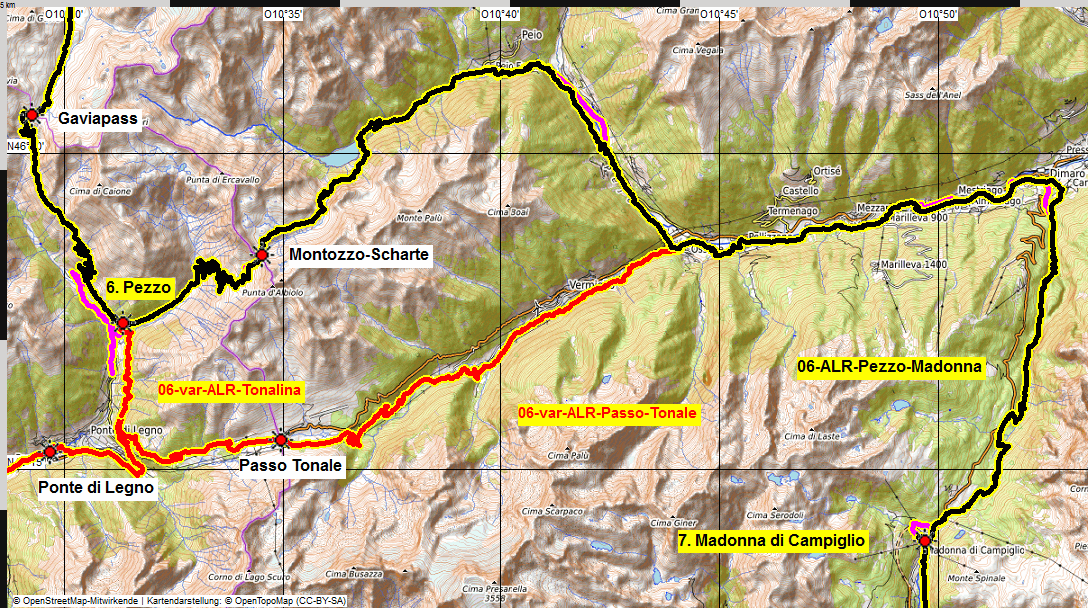