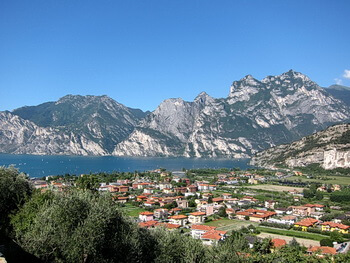 It's chilly as I peer out of the window in the morning. The sun is slowly climbing up the mountains, it's going to be another beautiful day. Great finish for our last day. Breakfast is plentiful: cheese, ham, jam, fruit and lots of different cakes. We give ourselves a good lining to the stomach as today is not a day for long breaks: Lake Garda is calling. We cycle through the town centre, past the lake and through the still cool woods towards the Rifugio Vallesinella. At the car park the concrete road comes to an end and our path heads off steeply downhill to the waterfall. The Rifugio Cascata di mezzo is still shut. Under the hut we cross a little, slippery wooden bridge and then part ride, part push the following single trail.
Soon we come to a logging track which brings us down to the Malga Brenta. The dew is still rising from the grass and the morning atmosphere is like a fairy tale. The gravel track into the Val'd Agola is only moderately steep and great to ride. I challenge myself and keep up with Matze and Christian (more likely, they reduce their tempo so I can keep up). Before long we reach the path that leads to the Lago d'Agola, we three wait here for the others to catch up. As per tradition, we take a break at the lake by the tree stump. We're still in shadow, the sun is just making its way over the Brenta peaks. Slowly the lake is also bathed in soft sunlight. Leisurely we undertake the short but very steep carrying passage. I spur Christian on to cycle as far up the meadow as he possibly can. An impressive achievement. The last big climb before Lake Garda is behind us. On the Bears Pass (Passo Bregn de l'Ors) we stop for breath, take the obligatory group photo with the Adamello Group glaciers in the background and get ready for the downhill. Still first we have to get over the Passo del Gotro but that is no great problem.

The Val d'Algone lies in front of us in the late summer haze. An incredible downhill starts: 700 metres of descent on gravel to the Rifugio Brenta and then another 500 metres on a small asphalt lane. At the end of the valley we pack away our wind jackets, it's got much warmer. Astonishingly this time the wind is only blowing moderately in our faces as we cycle towards Stenico, none the less everyone tries as much as possible to get behind someone for wind shadow. The points for the sprint are awarded in the Piazza Centrale in Stenico. From here there are several ways to get to Lake Garda. The two classic routes are known to all: one is over the Passo di Ballino, a often done road version. The more interesting from the landscape is the more remote Val di Lomasone. The bitter pill with this one is that you have two very steep passages on the old roman road where you have to push. Both versions reward the successful transalper with the first glimpse of the Lake from several hundred metres above it at Tenno. During our tour week at Easter we did both versions. 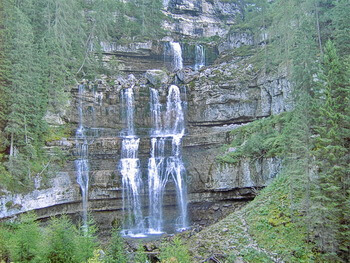 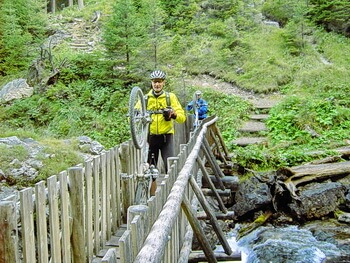 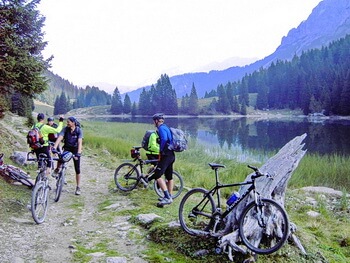 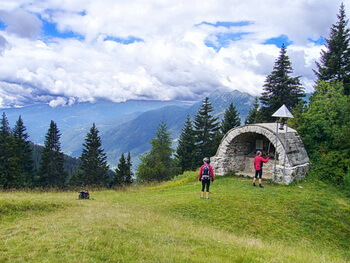 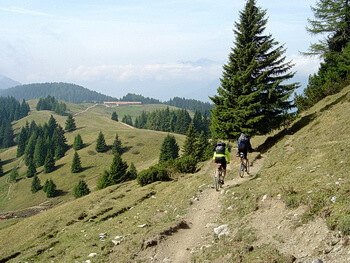 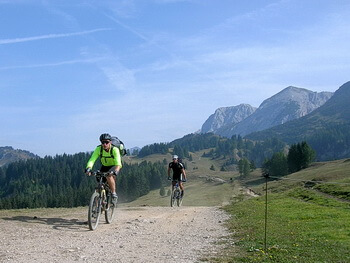 For this reason we wanted to do a third version, which has the advantage of hardly adding on any more climbing metres, and still has fantastic landscape; the route on the old Sarca road. Between Ponte Arche and Sarche over millions of years the river has carved a canyon through the rocks before reaching the plain at Torbole flowing in to the Lake. On the Ponte Sarca which swings boldly over the canyon we cross the abyss. We have to do a short bit along the road, but the hard shoulder give us enough space to make it quickly without getting too stressed by the traffic. They're obviously in the process of building a bike lane which will make this passage a little friendlier. Before the first tunnel the Strada Vecchia turns off to the left into the Sarca valley. It snakes its way along the rocks high above the canyon floor. At this time of year there's not a lot of water in the river. The old road's surface is covered with broken off bits of rock. Slowly nature is reclaiming the road for itself, trees and bushes are growing out of the cracked asphalt, in some places there's only a narrow strip left for us. We ride in single file. In a curve we carefully roll up to the low wall at the edge of the road. The cliff falls off vertically and way below the river gurgles. It takes your breath away. We elegantly avoid three tunnels like this which even on weekdays are full of traffic. This stretch reminds me a lot of the old Ponale road on Lake Garda and must have been built at around the same time. Finally our trip into the past ends above Sarche. This is where the fertile plain starts which stretches from the Lago Toblino over Dro and Arco to Lake Garda. At the beginning of the village Sarche we cross the Sarca again and turn straight onto the bike road which follows the river. As of this year you can cycle it completely. Unhurriedly we roll the last kilometres to the end of our transalp. In Pietramurata we choose the way along the Lago di Cavedine which involves a short climb through the stony desert of the Marocche. It was formed during the last ice age by a huge rock slide from the whole rock wall of the Monte Brento as the huge glacier that also made the Lake Garda retreated. This is where we see the Lake for the first time, fabled destination of many a transalp. There's no stopping us now, at high speed we race on towards Dro, though as Olaf is always saying "there's still space for just one more ice cream". Behind the shoe shop there's the Gelateria "Maui". Here you find what I think is the best home made ice cream for miles around. Our ice cream specialists Olaf and Rainer are sceptical at first, but are forced to agree with me. From Dro we follow the banks of the Sarca again, on an old cart track through the olive roads. Fig trees grow by the old roman bridge in Ceniga, the fruit is ripe and we pick some to try. The way goes on past Arco's famous climbing walls, there's always a lot going on up there. The last race happens on the bike road to Torbole. At the lake Matze wants to trade his bike for his much loved surf board, the wind is so strong this afternoon. We go a few metres along the beach and reach the café in Torbole where I always finish my transalps. Our reception committee consisting of Simi and Diana are there with the finisher T-shirts. We've certainly earned them. 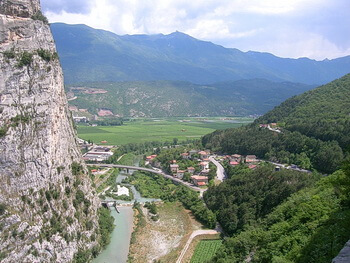 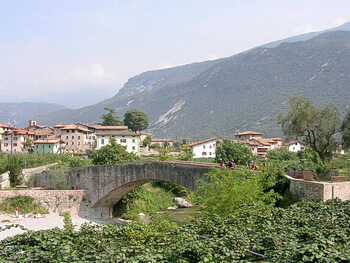 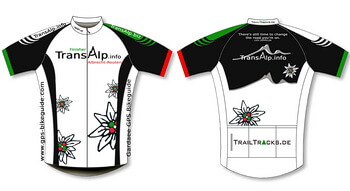 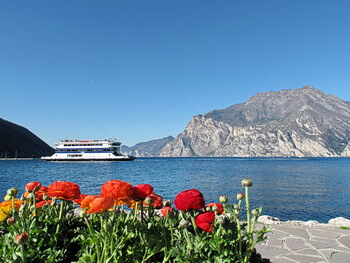 Lake Garda is the target Number 1 for ever and ever in case of crossing the Alps. The reason why? Look at these pictures. 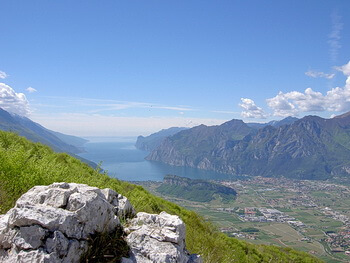 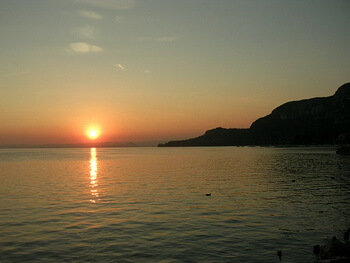 The route via Ponte Arche and Passo Ballino is now an integral part of the main route. It's well documented in Transalp Roadbook 1 (english version).